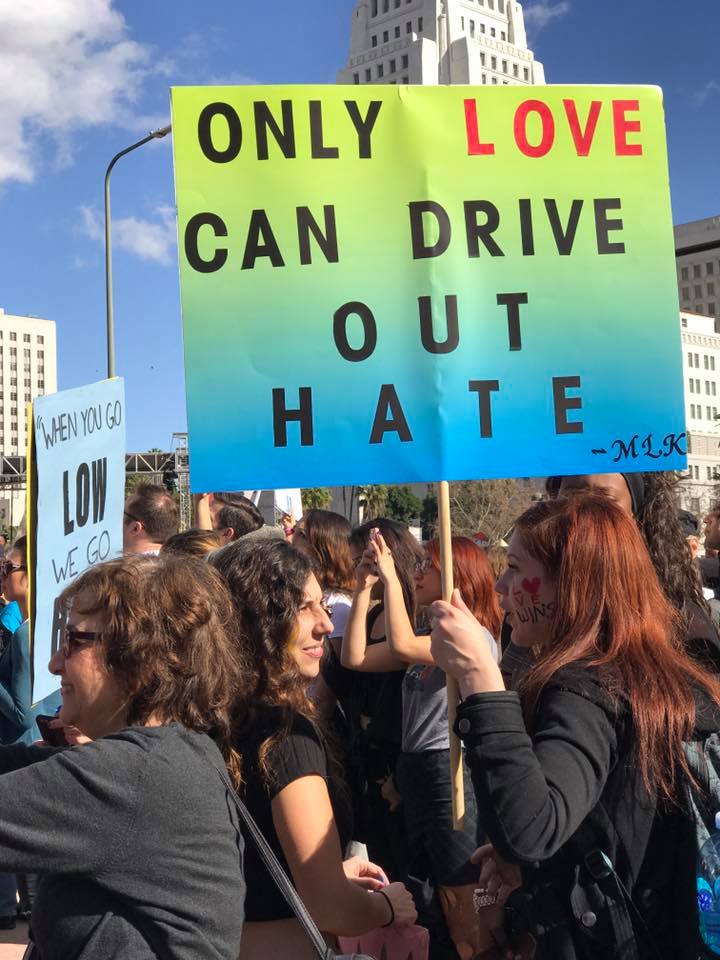 So I chose not to attend the Women’s March on Washington on January 21st and instead scheduled patients in honor of the March. I decided to take care of the “Pussies” here at home in Boston. After all, I am a Gynecologist and have been working to convince many of you that “It’s” not nasty for years. More importantly, I have been living my life, making choices, and supporting policies in favor of greater solidarity my entire life. How could I not? I was born to an African-American mother who grew up in segregation and a White, Jewish father in 1974. I was born Black, by this country’s definition of race, in Indiana, and in severe poverty. For me to embrace the concept of solidarity was like breathing. It came natural. Before I could even define solidarity I was living in the consciousness of it. Judgment was a constant hot stone cast during my early upbringing and adulthood. Thankfully now I’ve learned how to dodge that stone, and numb the pain on the days I’ve failed to do so. And as painfully palpable as judgment is, I learned early on to embrace difference, forgive, and choose love; because love is love. Thankfully, now in my fourth decade, I can find the comedy in the tragedy. I can self-reflect and focus on my role in the process and choose to remember the women who opened their hearts and minds to my differences along the way. But we’ve all been guilty. Judging each other, analyzing each other. We make decisions about each other before we even speak to each other. We can no longer afford to be selfish and pretend that what affects her does not affect me, or you.

As a black woman and physician working in Boston’s Health Centers, I’ve mastered the art of making choices toward greater solidarity and have been waiting for a wave of collective consciousness to engulf this Nation.  Working in a city that values people, with an abundance of resources and top medical institutions, but yet still suffers from disparities in Healthcare, I have to check my cynicism at the door and do my part daily. Despite our challenges in Boston, I know what it’s like to work in a state where Universal Healthcare is not a “Right.” I’ve witnessed women dying of cancers and problems that could have been prevented. And I’ve witnessed women suffering from depression and suicidal thoughts who could only be sent to the Emergency Department because no office would accept Medicaid. Needless to say, when the opportunity arose to return to Boston to serve in 2014, I ran back with elevated arms and a greater sense of purpose. I cannot ignore the issues of poverty, prejudice, racism, classism, injustice, sexual violence, discrimination, mis-education, and privilege that pollute the air in this country. I choose to embrace and face each of these abuses as they come packaged up in different forms with every woman who walks into my office from Boston’s city streets. All women are deserving of the highest quality of care and concern. And when I listen, I am privileged enough to receive the lesson in it all with open arms.  I am constantly elevated through empathy and service.

No doubt the Women’s March on Washington was a beautiful palette of diversity to witness. My heart was full, and the visuals gratifying. The March gave me hope. A moment of daydreaming and visualizing took over my mind and into it entered the potentiality that women will put aside their differences and truly consider each other. In this moment and in this time perhaps it is possible for women (and men) to realize we are accountable for each other. What we vote matters. We cannot afford to be selfish or uniformed anymore. We can’t afford to cast emotional votes that will affect millions of individuals’ healthcare plans if you’ve never been sick and/or uninsured. We cannot afford to cast conservative votes that speak to pointed definitions of reproductive rights, which excludes her definition of reproductive rights, just because there is a line that does not suit your needs or beliefs. You cannot turn a blind eye towards others’ definition of love just because it does not resonate with your own. If this election has stopped us in our tracks, and forced us to pay attention and think about the greater good, then maybe America’s spiritual process of evolution is right on time. I call it Divine Time.

Listening to NPR on the way into the office today, the woman being interviewed resonated comments I had heard all to well. Whether they attended the March in Washington, streets of Boston, or in other cities, the theme was a united one. “It was amazing; The spirit and energy was profound; I felt we were truly a cohesive group.” Admittedly the woman on NPR confessed she was still absorbing the experience days now after it had ended, and needed to figure out what to do next. She had come to understand that to gather in favor of women’s rights, reproductive rights, embracing immigrants, and protecting the strides we’ve made toward true health care reform and gay rights is no longer a choice. Standing united on all of these fronts would now need to be a daily practice.

As I lie restless in bed, witnessing the damaging effects of global warming as strong winds crashed against my home amidst the fourth day and night of heavy rain during this unique Boston winter, my mind raced about the strokes of the pen welcoming in new executive orders that will change the lives of millions of men and women. In that restless hour, I did what any desperate insomniac should not do… logged on to Facebook.   And there they were, 48 hours after the Women’s March, posts with attack after attack from women, to women arguing over who attended the March, who did not attend the March and speculation over who wanted to attend the March but their husband’s wouldn’t let them. But most troubling in this mix was the criticism of Mothers who brought their young daughters to the Women’s March. Until we are fully united, raising conscious children, we will continue to allow systems and ideals to divide us. Bigoted adults were once inspired children. We have all been there; blanketing nine-year-old girls in doubt and scorn because of her confidence. Instead of sheltering your young daughter from the strong willed young girl who is “more advanced,” you can embrace that child for who she is, where she has been, and what she will become instead of sprinkling hate that can potentially blemish her future. Embrace every young woman; learn what she needs, give love and light. Until women see strength as strength, men will not. It is time to stop using and perpetuating the adjectives bossy and difficult and lead by example. Maybe then true change will be possible and our next march will push legislation into action to benefit the masses and address the inequalities that still epidemically infest the blood of America.

The real work is yet to come. Those of us “idealists” thought this Nation was cured seeing a blemish free black family in the White House lead our country with such dignity and grace. But what we’ve learned is this; The United States still thrives on drama and its citizens have welcomed reality TV straight into the White House. In this uncharted political climate, choosing to embrace differences will be the ultimate challenge. And choosing to embrace differences and ignore ignorance will be even harder. Oftentimes that will mean sacrificing what is comfortable in order to yield to a greater vision of good. The truth is, for real solidarity in this country, what we need is respect for each other. We need to change our collective consciousness to embrace an interconnectedness that has truly been lacking among women. We are interconnected. But recognize my path is not your path. Your path in life is not her path. But there is a lesson to be learned in every path.

I’m on the edge of my seat in anticipation, hopeful that this is going to “get good” over the next four years. The take home message is to Take the Message Home.

If the visual of the Obama’s leaving the White House and turning over the most Sacred Office to a Leader who sparks controversy causes us to self- reflect… and ask ourselves, “What did we do? What can we do? Why didn’t I do earlier…” then this election is revolutionary. No matter which way the vote was cast; No matter what the Electoral College decided; if this current election forces us to take pause, plan marches in the name of solidarity, create movements for change, demand equal pay for equal work regardless of sex and race, insist that love is love, mandate true inclusive healthcare reform, and recognize that the blood of immigrants runs through the veins of every American… then maybe it was right on time. America fell asleep after the 1960’s where every day citizens voiced their concern and took action instead of nodding to celebrity. If this election unmasked old, unhealed wounds and forces us to finally seek help; if this election changes the way we think about every vote we ever cast from this day forward and reminds us that the power we have in choice matters; if the next four years causes us to live in a collective consciousness motivated by love, then perhaps it was a victory after all.

So march on, but upon returning to your comfort zones, I pray the take home vision and message is clear…We Must Consider Each Other. We must be mindful of what we do and how we approach each other every day. Be an activist in your daily life. Consider each other as Co-Workers, Mothers, Colleagues, Friends, and Wives. We need to support each other, and find mentorship among us. Be a beacon. End the judgment and seek understanding. We need a moment of Grace. Grace, like what happened in Washington D.C. and all over the United States on January 21st.